From the kitchen of our favorite foodie about town, Michelle Auerbach:

Feeling springy?  Feeling cleansy?  Feeling the need to eat all the greens that popped up at the Farmer’s Market this week?  Want to add your Zuké to a salade composée?  Here is the dressing and the salad for you.

Place all the ingredients in a blender.  Blend until smooth.

For the salad, I bought one bag of lettuce from Oxford Gardens, one bunch of carrots from Cure farms, I had some tofu in the fridge I had friend up yesterday in coconut oil, and some steamed asparagus.  To this I added a heaping ton of Zuké beets, dulse, & kale.  The key to a salade composée, or a composed salad, is to make it look appealing on the plate, with drizzles of this and jots of that in contrasting and vibrant colors.  Use whatever you happen to have in the fridge including but not limited to cooked potatoes, chicken any way, steamed veggies, salmon, tempeh, good raw milk cheese, green beans, snow peas, really anything that catches your eye.

The key, though, is the combination of the grated beets and the salad dressing with some lettuce to catch the juices. 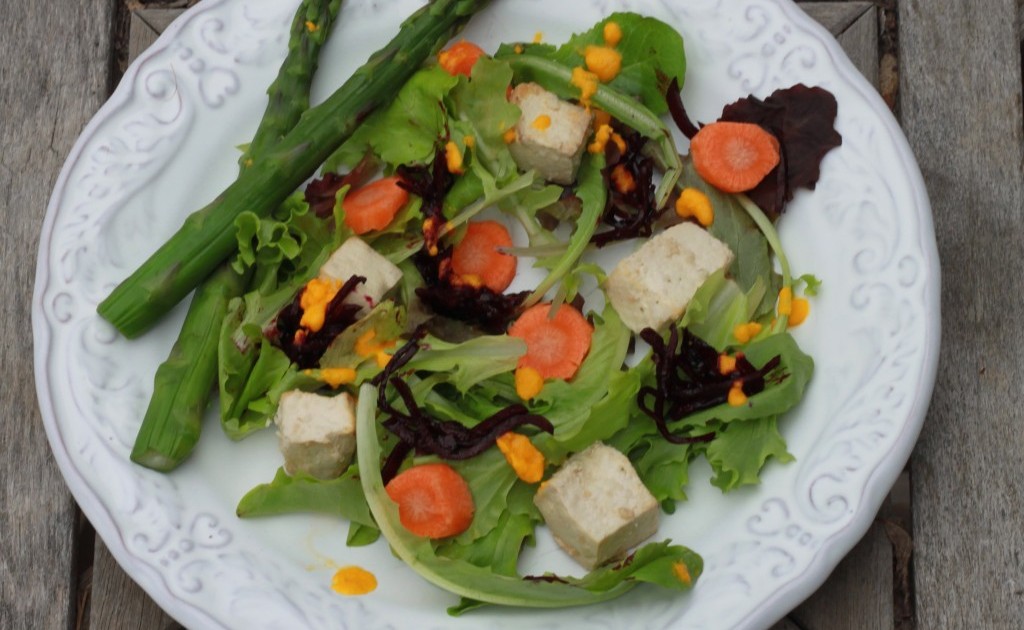 It all began, like so many things in food world, in the kitchen.

Mara King and Willow King — same last name, but they aren’t related — took one day a week to hang out together and make stuff from scratch. They tried sausage. Cheese, from raw milk. Kombucha.

They dreamed of opening a restaurant or a delicatessen, but the pickles kept nudging them, whispering: Restaurant schmestaurant. So expensive! So many of them! Stick with pickles!”

It turns out pickles are persuasive.

Instead of turning blank space into a room full of food, last May they began filling pretty jars with vegetables, herbs and spices and selling them in stores in the Boulder area. And soon their business, called Esoteric Food Company, will have a stall at the Boulder Farmer’s Market, and their products – called “Zuke,” short for Tsukemono, which means “pickled things” in Japanese – may also be on shelves at Whole Foods throughout the Rocky Mountain region.

At first, “we were giving it away and selling it at Lucky’s Market in Boulder,” said Willow. “A case here, a case there.”

Now three other people work with them, and twice a week they process 500 pounds of vegetables or more at a commercial kitchen.

They have big plans. Among other things, they want to buy different stuff at the Farmer’s Market every week, pickle it, and sell it until they run out. Each week, they hope, they will have two new pickled products – in addition to their regular line – for sale.

“We are moving away from this idea that dinner comes from a box and it’s always the same,” said Mara. “What is ready now should decide what is for dinner tonight.”

I tried the kimchi. I hadn’t tasted the stuff in maybe 20 years, since I lived in Minneapolis as a 20-something graduate student and nearly OD’d on kimchi and its punch of pungent funk.

But one taste of Esoteric’s version, and I fell in love with it (although later, on a picnic on Flagstaff Mountain in Boulder, my daughter Ruby could not stop talking about the aroma. She was not a fan.)

I also had bites of the beet, hijiki and kale, and the dill, caraway and cabbage. Fantastic stuff.

Often in the depths of winter I get hit with a serious humdinger of a flu and this year was no exception. I returned home from a lovely holiday with my family and after a few days I had the distinct feeling of being pulled down by a heavy weight that has kept me in bed for three days now. Being sick is not all bad. It seems to be part of a ritual of renewal  that happens for me at this time of year, usually around the Celtic festival of Imbolc.  Having some time to rest and think about ones life and ones health can create an odd sort of inspiration- just the thought of walking around and feeling good seems a true blessing and it makes you want to continue to realize that blessing and take good care of the carriage. I have (along with a stack of long neglected New Yorkers, Harpers, and Atlantics) been re-reading Green for Life, Nourishing Traditions and some other oldies but goodies that encourage balanced, sustainable good health. I also cut out a page from an old NYTimes Magazine by Mark Bittman about going mostly vegan as a way

to boost your energy and improve the state of the planet. I have been reading about pH balance in the body and as it turns out food protein, which is vital for maintaining your health, can also create an acidic condition in your body’s pH balance.  An acidic body pH condition facilitates accelerated aging, system degeneration and increased susceptibility to sickness and disease.

What else affects pH and causes it to become unbalanced? A mild acidosis condition (an overabundance of acid in the blood) can be caused by improper diet, but also by poor lifestyle habits or toxic emotional states. The amount of acid in the body can increase through ingestion of acid-forming foods, but it can also be affected by an abnormal metabolism or kidney malfunction. As we age, our body’s systematic removal of excess acid has begun to slow down which is why you sometimes feel like you need a new carburetor.
Although it seems a bit illogical, our bodies metabolize acid foods as alkaline and metabolize alkaline foods as acid. Acid foods (citrus fruits, vegetables, vinegar and other fermented foods- zuké!) all become alkaline when consumed and metabolized and so are called “Alkaline-forming foods”.On the other hand, alkaline foods (meats, flour, sugar, soft drinks, alcohol, aspirin and various medications) are metabolized by the body into “acid-forming foods.” That’s why the average American diet of hamburgers and processed food can and usually does contribute to a condition called “mild acidosis.” Although eating some acid-forming foods is okay, it is best if we consume 60-80% alkaline-forming foods for optimum health.

So, there you have it- along with a new found addiction to Downton Abbey  and a pile of used handkerchiefs I have a renewed resolve for revitalizing with more simple pH balanced foods, plenty of deep breaths and a healthy dose of gratitude.

Today was just one of those days. Locked the keys in the car etc. etc.  There was work and school and soccer and by the time we got to dinner we wanted it FAST. So: Brats (if you are brave enough to make your own, here is a little tutorial) buns, our Ozuké dill,caraway and fennel kraut, some pickled peppers, mustard and done. Dinner was a hit, the probiotics even out the white buns and everybody goes to bed full and happy. You can make your own mustard too- fun and easy (on a day when you don’t have much else going on.)
Homemade mustard:
* 1/4 cup yellow mustard seed
* 2 Tbsp. black or brown mustard seed, heaping
* 1/4 cup dry mustard powder
* 1/2 cup water
* 1 1/2 cups apple cider vinegar
* 1 small onion chopped
* 1 tsp. salt
* 2 garlic gloves, minced or pressed
* 1/4 tsp. ground allspice (optional)
* 1/4 tsp. dried tarragon leaves
* 1/8 tsp. turmeric

Preparation:
In a small bowl, combine mustard seed and dry mustard. In a 1- to 2-quart stainless steel or nonreactive saucepan, combine remaining ingredients. Simmer, uncovered, on medium heat until reduced by half, 10-15 minutes. Pour the mixture into the mustard mixture. Let mixture stand, covered, at room temperature for 24 hours, adding additional vinegar if necessary in order to maintain enough liquid to cover seeds. Process the seeds and mixture in a blender or food processor until pureed to the texture you like –this can take at least 3 or 4 minutes. Some prefer whole seeds remaining, others a smooth paste. The mixture will continue to thicken. If it gets too thick after a few days, stir in additional vinegar. Scrape mustard into clean, dry jars; cover tightly and age at least 3 days in the refrigerator before using.
Makes about 1 1/2 -2 cups.

Why Should You Eat Cultured Foods?

Here are a few pointers:

Basically, fermented foods help supply your digestive tract with cultures that are necessary to break down and assimilate nutrients. Our Ozuké all contain Lactobacilli and that is what makes them not only food but good medicine too. 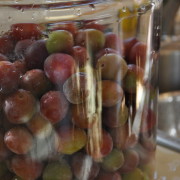 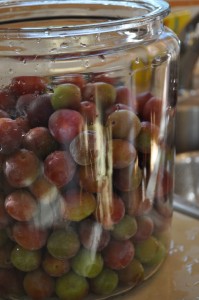 One of our early inspirations for this business was the book “Wild Fermentation” written by the very inspiring Sandor Ellix Katz. In an early section of the book he says, ” We can merge our appetite with activism and choose to involve ourselves in food as cocreators. Food has historically been one of our most direct links to the life forces of the Earth. Bountiful harvests have always been occasions for celebrations and appreciation of the divine.” Katz suggests that through creating and enjoying cultured foods you “build your body’s cultural ecology as you engage and honor the life forces all around you. ”

We could not agree more!These are some wild plums that we harvested and then experimented with preserving  in salt to make something resembling the Japenese umeboshi. The result was a fascinating, lively, bubbling plum pickle which Mara reports eating for breakfast leaves her feeling great all day long.